From the company that brought you Roller Aaller 3 now comes CLEPDOCHEHNIX. Much has changed during the time between these two videos but the spirit has remained the same!

Extended Play meaning:
1. extended play (record, tape, etc.)
2.an extended-play single, one of the formats in which music is sold, usually comprising four or five tracks.
Welcome to Cleptomanicx’s newest offering “Extended Play” which is aptly titled because it is in fact not a full length but also not a single.
It is a mid-length video created by Nizan Kasper who used musical terminology to give these 10 to 15-minute videos a suitable name. To strengthen the reference, he divided the project into a side-A and a Side-B with two “tracks” on each side.

Similar to an EP there is a single on this recording, and there are album cuts. Like the team montage, which features one of Denis Laaß’ best tricks ever, we guess the music reminded him of the 90’s and sparked something!

Another great album cut is Niklas’ 50-50, Nosewheelie nollie flip and David Conrads vert trick which came as a surprise to many.

But in the end, people often buy the EP to listen to the single and that single is Benny Vogel and Lars Zimmermann’s welcome part. Pop and creativity are what they bring to the table with a classic “Day before the premiere” type of ender. Let hope Hamburg is proud of what they achieved because this is not an everyday thing.

Now press play and enjoy all that this EP has to offer.

“Späti (pronounced shpi-tee) is a shorthand for a German corner store. It was the most common word spoken by my new German friends Nils Brauer, Daniel Pannemann, Tjark Thielker, and so many others. Between every spot a debate would be sparked as to where the nearest späti was and whether it was in the direction we needed to go. The späti serves as both the snackbar and the regular bar – unlike The States, you are free to sample adult beverages right outside.” – Brett Nichols

Since I wanted to write this article as authentic as possible, I decided to travel to the town of Essen in order to get to know every single one of the guys behind Europe Co. and also get an idea of their everyday lives. Essen is part of the so-called Ruhr Valley, a region situated in the west of Germany that consists of several larger cities located really close to one another; including towns such as Dortmund, Bochum, Duisburg and more. Thanks to their close proximity, you can easily switch between the cities in a minimal amount of time via train, which in turn unlocks an almost unlimited abundance of spots. The urban areas all have this rather modern architectural character with high-rise buildings, strict geometrical forms, and lots of concrete, steel, and glass. The cityscape tends to change at every street corner from snug to rough, from rich to poor, from vibrant green to gloomy gray. As I learned on my visit, this is exactly the environment the Europe Co. is rooted in. 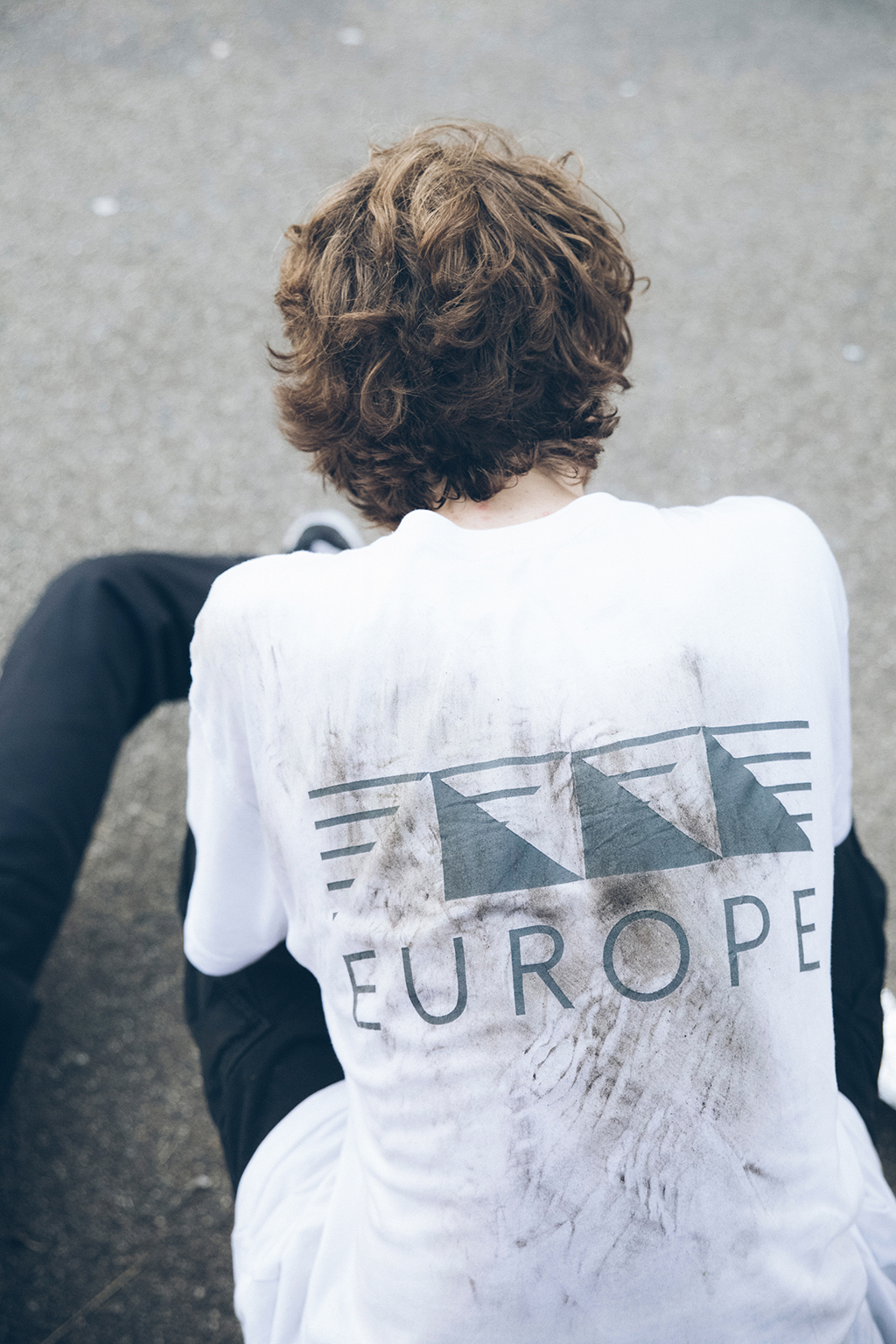 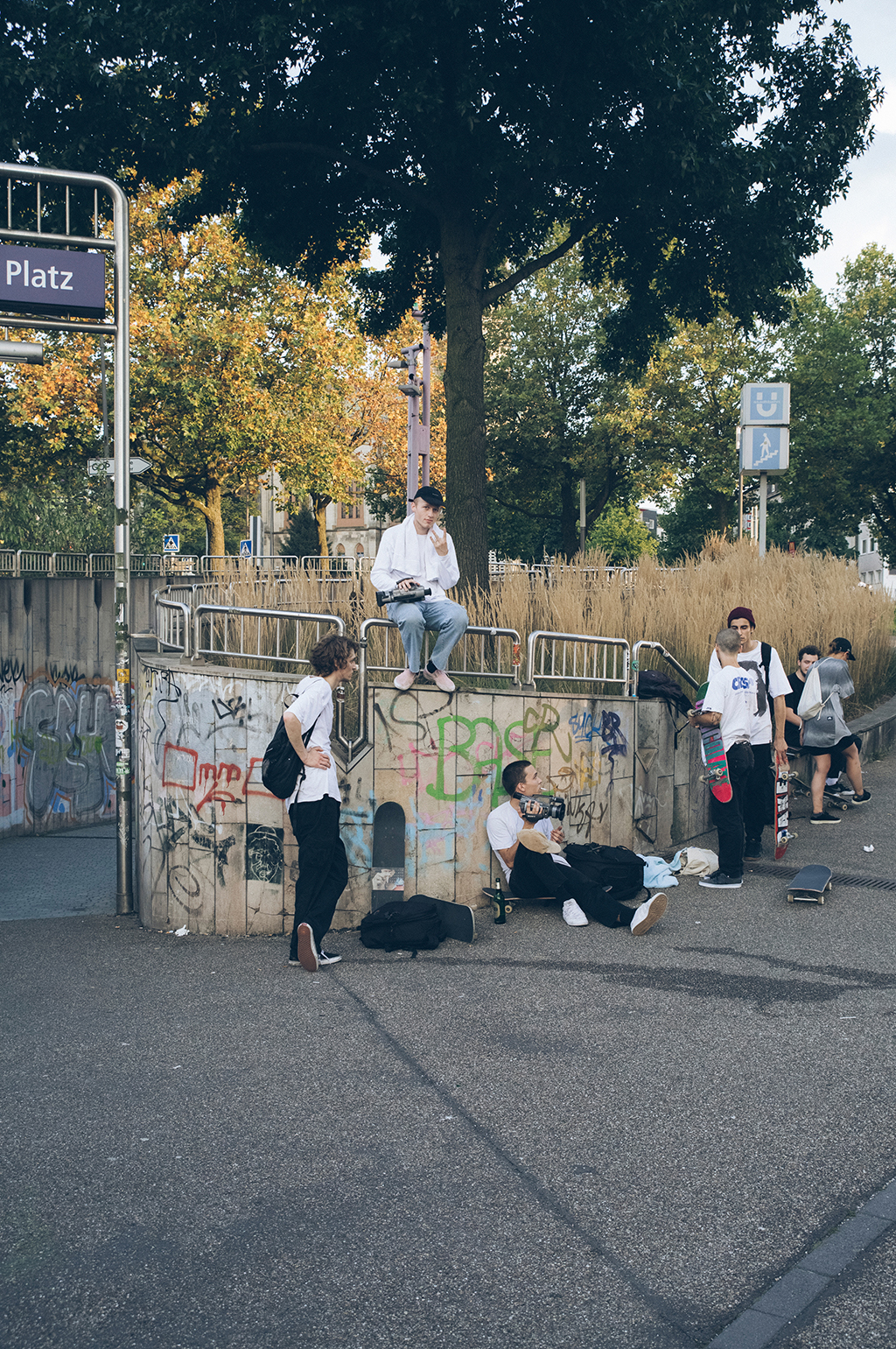 The main man behind Europe Co. is Niels Reimann. He designs all the graphics for the clothes, films and edits all the clips, and takes care of the daily business. During my three-day visit, I stayed with him and Deo Katunga. The two share an apartment in Rüttenscheid, a really pleasant district of Essen with smaller houses, parks, cafes, and restaurants. What really struck me was the fact that Niels has been doing all the Europe Co. stuff and all the filming for only a mere one-and-a-half years at this point. Before that, he was producing beats and also released a cassette on a French label called Cindys Tapes. As we were sitting in Niels’ room watching some snippets of the upcoming Europe Co. video called autobahn – and Niels also showing me some of the music he made years ago – I understood that he has a certain intuition to know what fits well together and what doesn’t. This is actually reflected in all of his creative work. 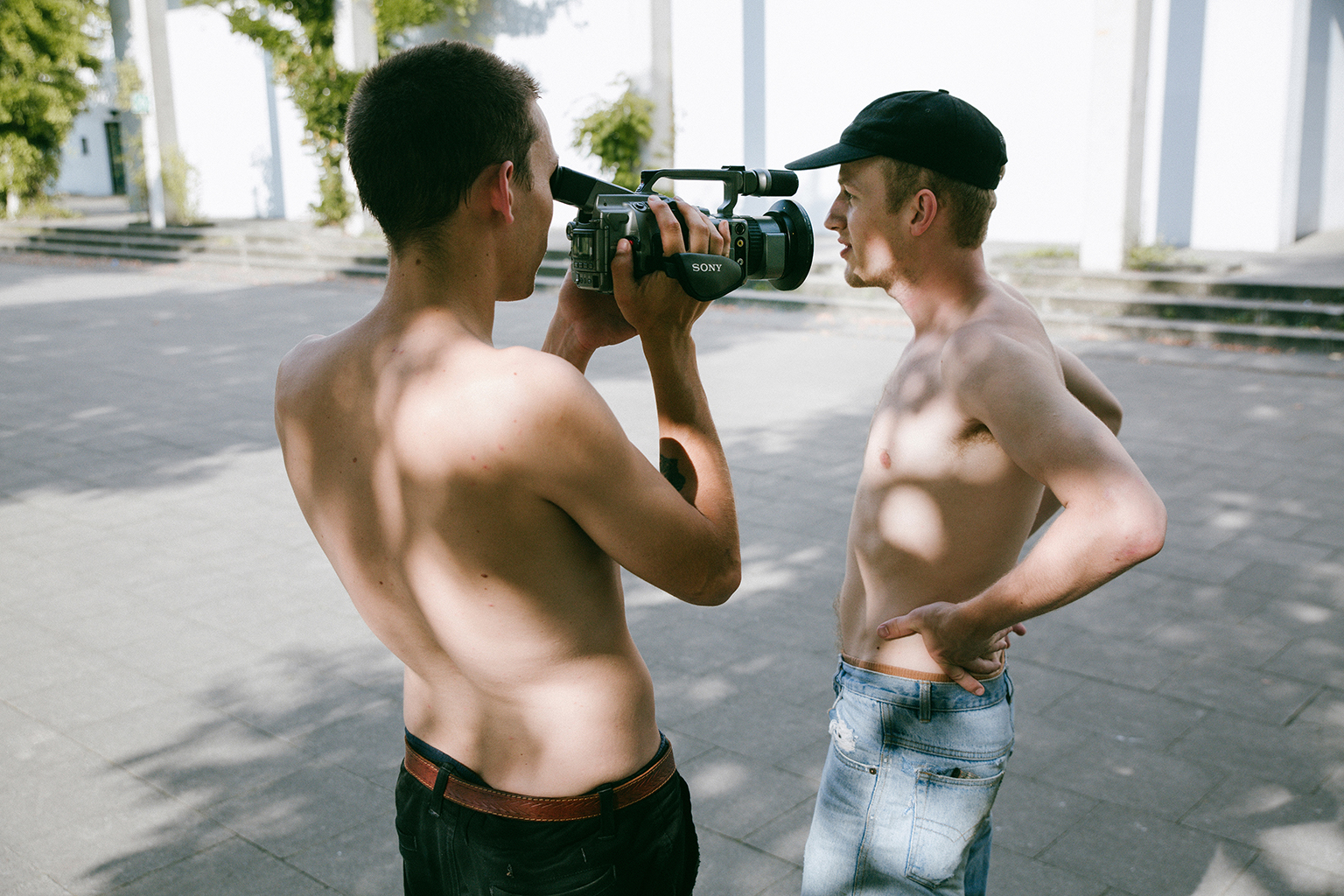 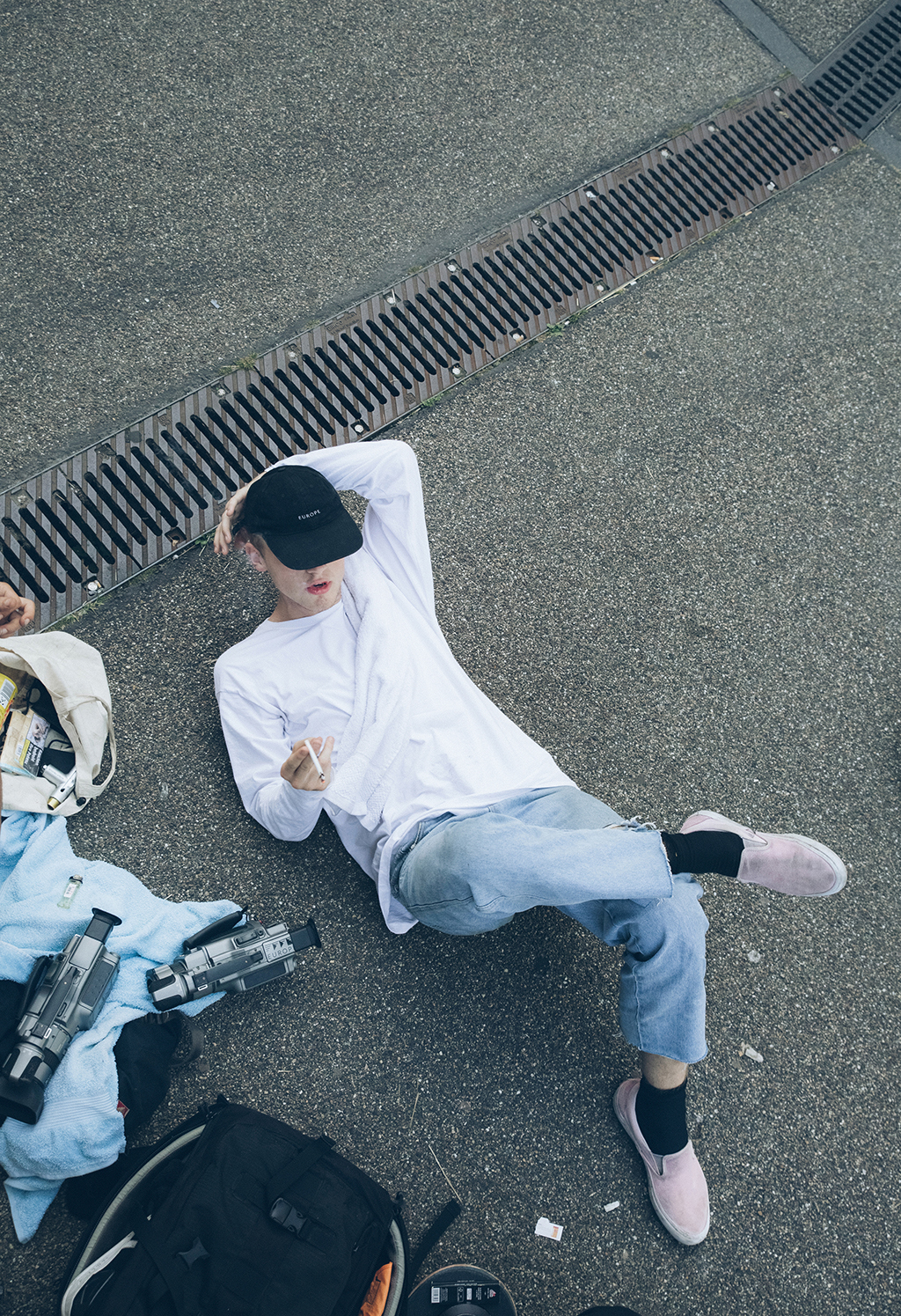 What I really enjoyed about the Europe Co. guys is that they all seem to be one big family that I also quickly felt belonging to in a way. Most of the guys have been friends and skating together for many years already. It was also great to see how a motivated group of ten to 15 people would go out skating every day trying to get some clips. I personally have not filmed anything for almost three years now and suddenly got super hyped to try a guest line for their video as well. Unfortunately, I did not manage to roll away but still they brought back a feeling, which I thought I had lost some time ago – the joy of going out there and producing something. Which, of course, can be the most fun you can have with the right people around you. Speaking of people, almost everybody in the Europe gang goes by one or sometimes several nicknames, which made it really hard for me to learn all their names and sometimes almost impossible to follow their conversations. Luckily, Niels helped me out with this cheat sheet: 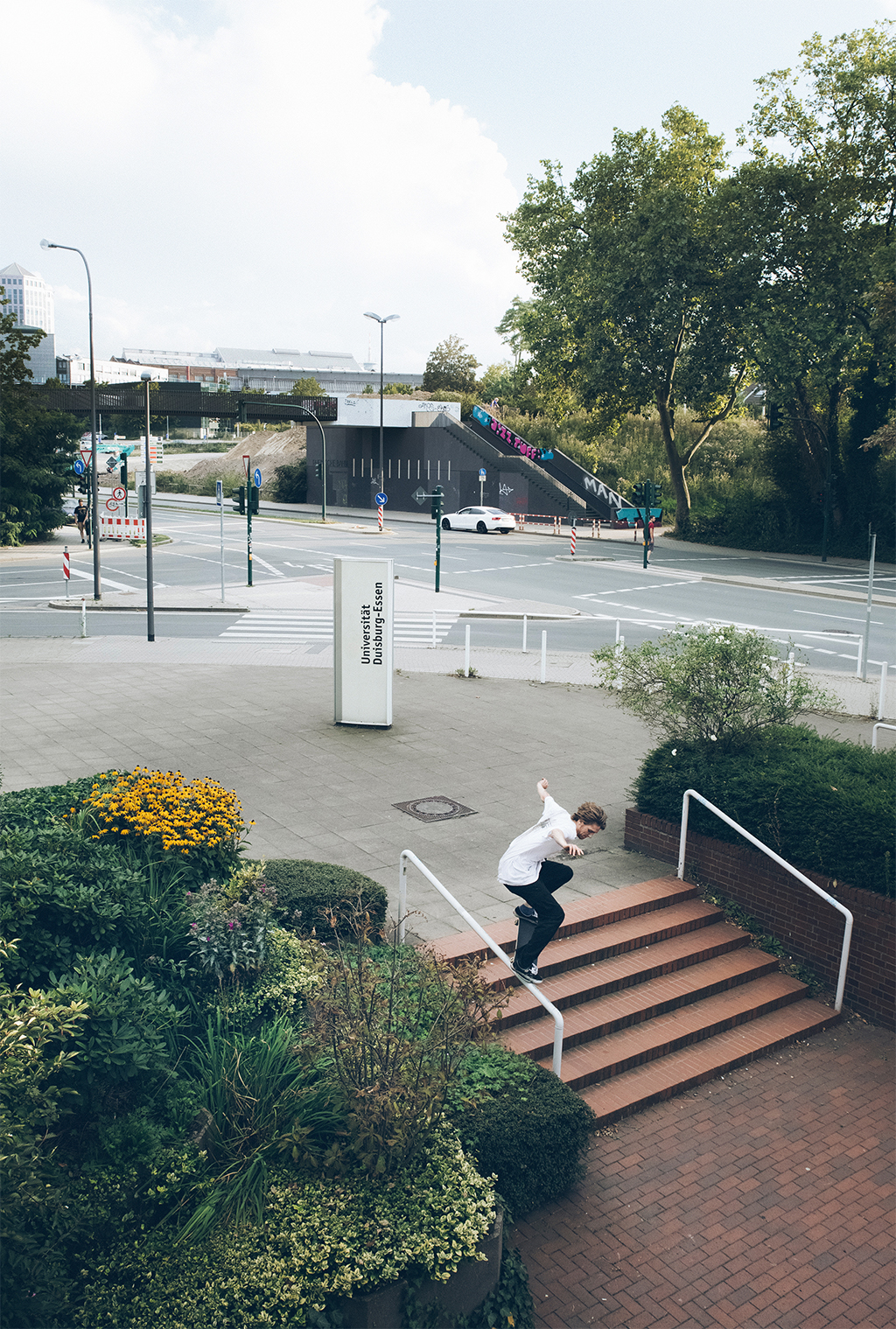 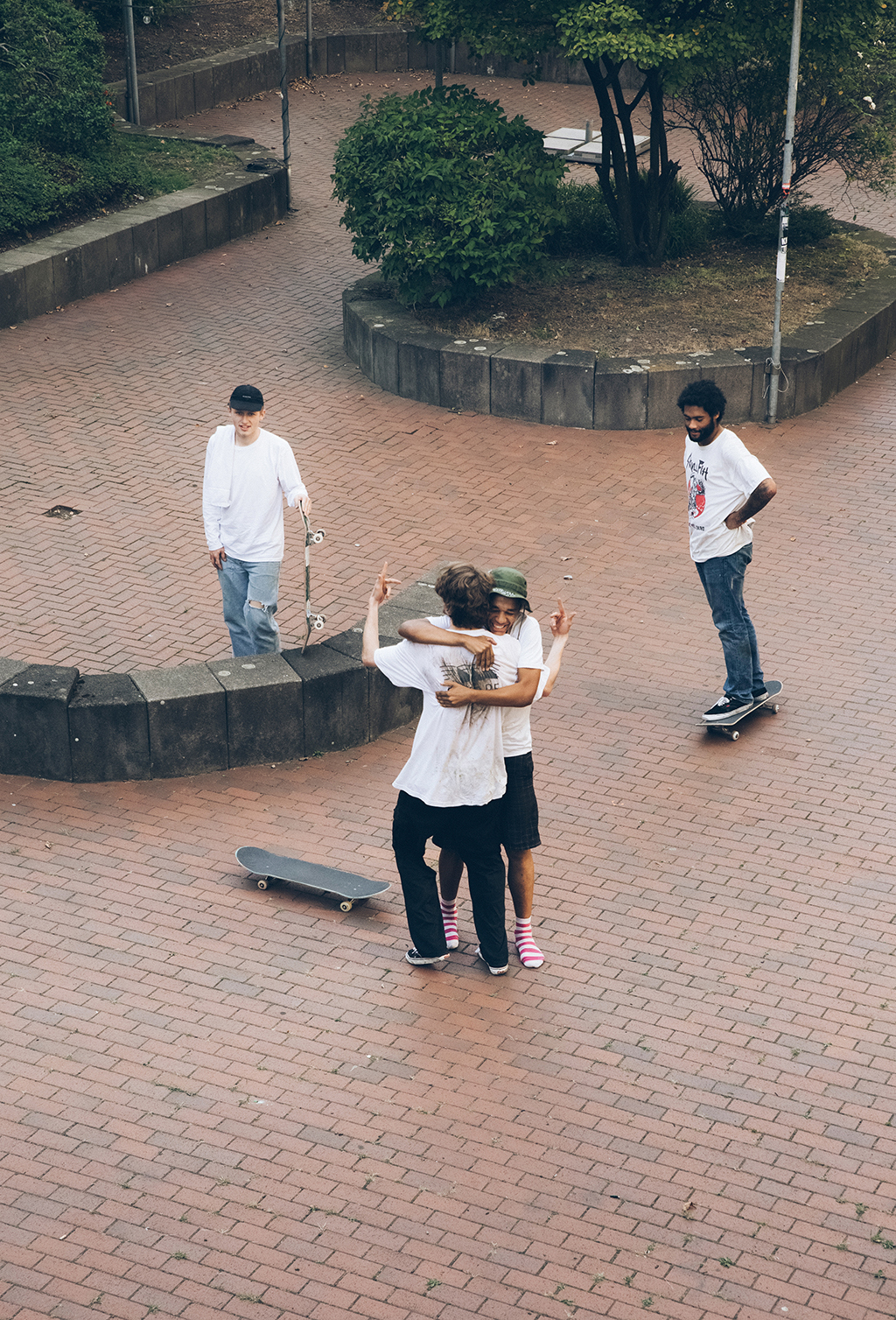 Don’t Fuck With The G!

On the day I arrived in Essen, Niels and Kuyt picked me up at the central station and we took the train to Dortmund – only half an hour in the same direction I came from – to meet with the rest of the gang. Nothing unusual really happened, until a character known as The G appeared at the spot. Without greeting anyone he went straight over to some guy and snapped his board, which resulted in a short verbal fight with heavy insults while everyone else was just watching the show. A few seconds later, The G introduced himself to me with a big friendly smile as if nothing of what just transpired had really happened. It turned out that the other guy had cheated him out of a serious amount of money, wrecked the door of his car, and did several other uncool things. Since then, The G snaps his board whenever he sees him at a spot. A little later, the other guy came back with his gang trying to raise a quarrel. But in the end, nothing happened because nobody really wants to have a fistfight with The G, I guess… 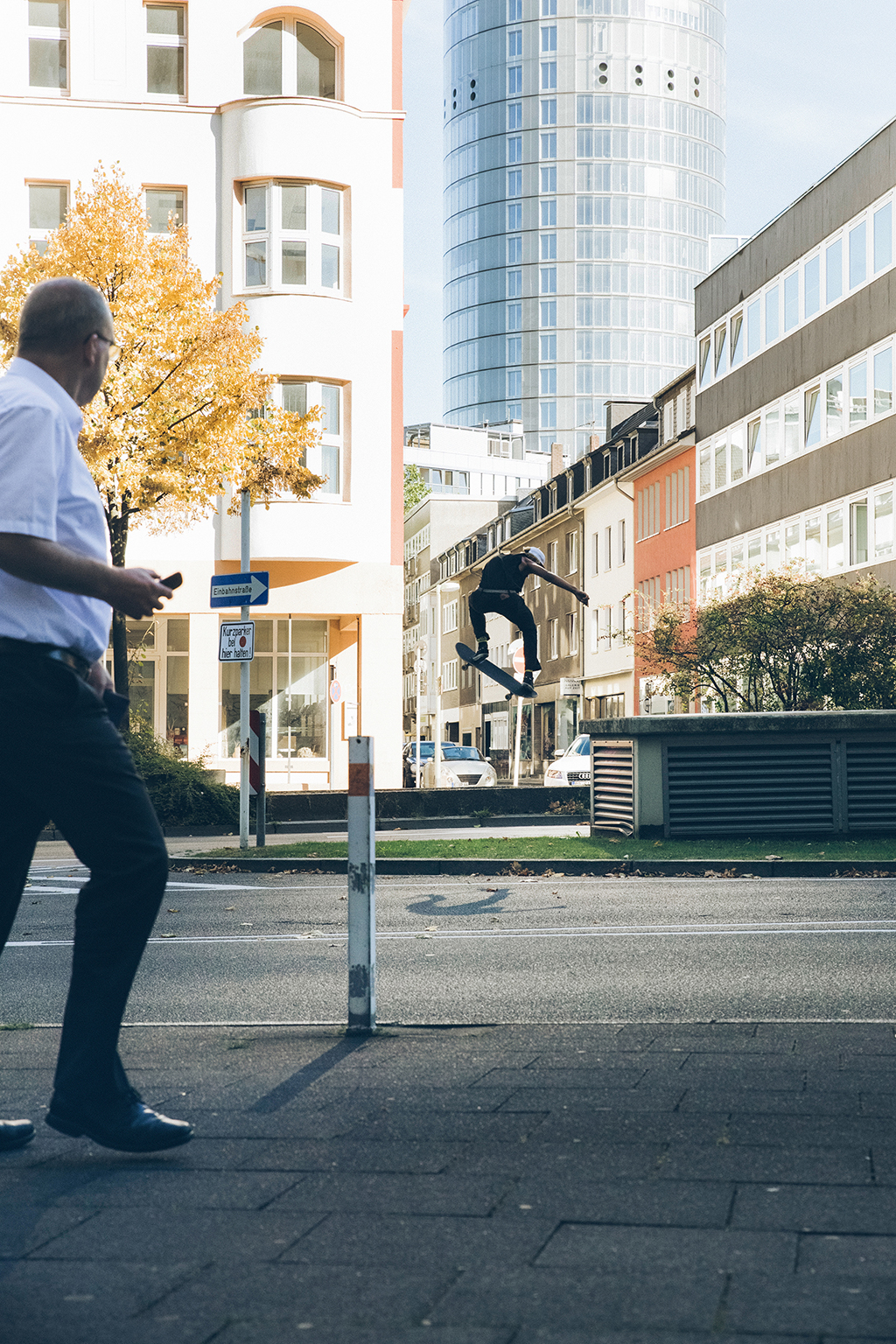 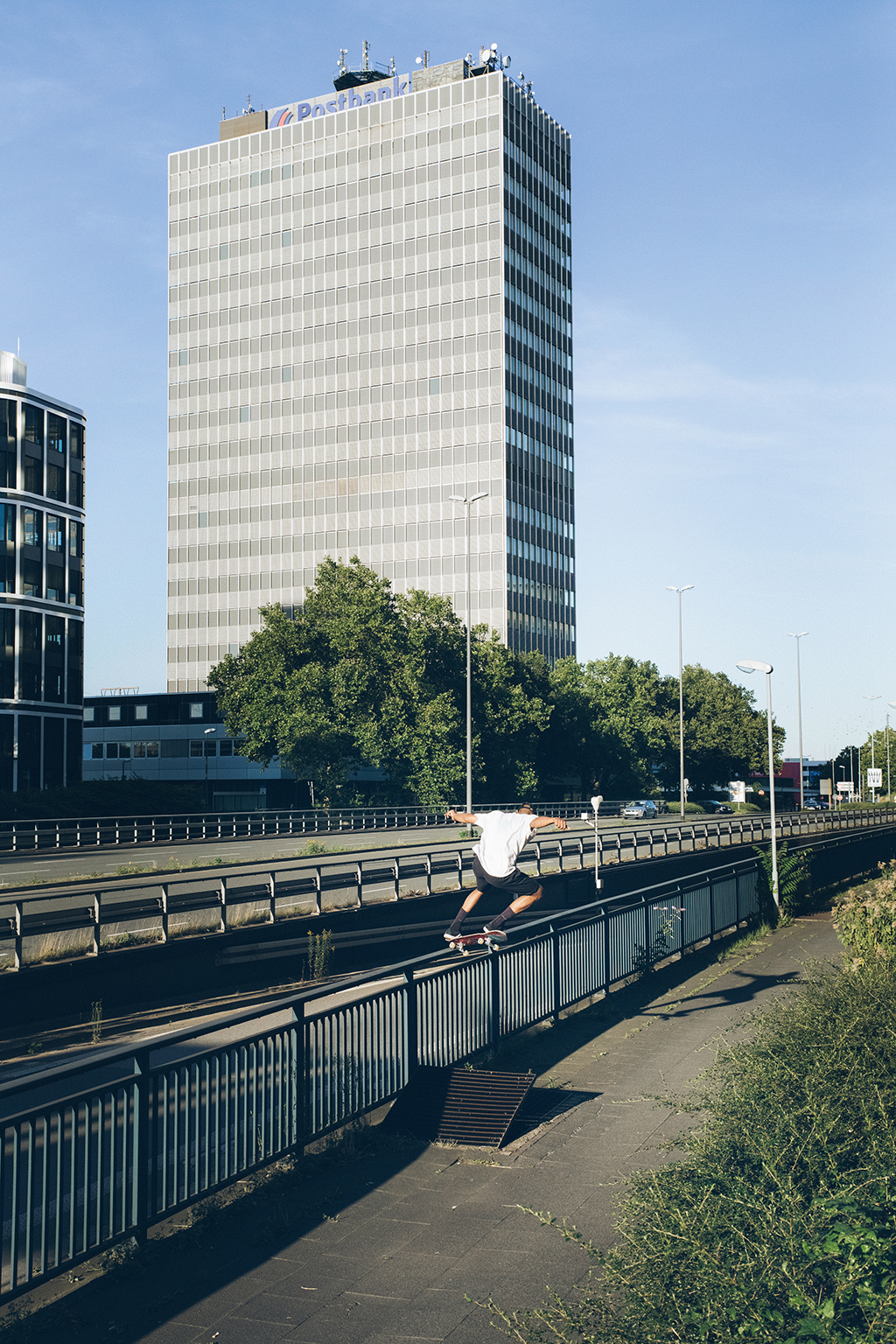 The Europe Co. definitely, has a strong crew that truly never goes home unless somebody gets a serious trick. I was really surprised by how much footage they produced within the few days I stayed with them. But still, one guy stuck out the most during the time I have been with them: Deo Katunga. I don’t want to waste your time with all the empty phrases that could be doled out at this point. But just believe me, this kid definitely has something special going on. Whatever spot we went to, he was like: “Yo, first try!” And even if he never really got a trick first try, he still made almost every trick within the first five or six tries. So after he piqued my interest, I soon began to like this weirdo and we naturally started talking about his roots, life, and dreams. Which is, at least to my mind, reason enough to bring a little conversation I had with him into this article more on that later today. 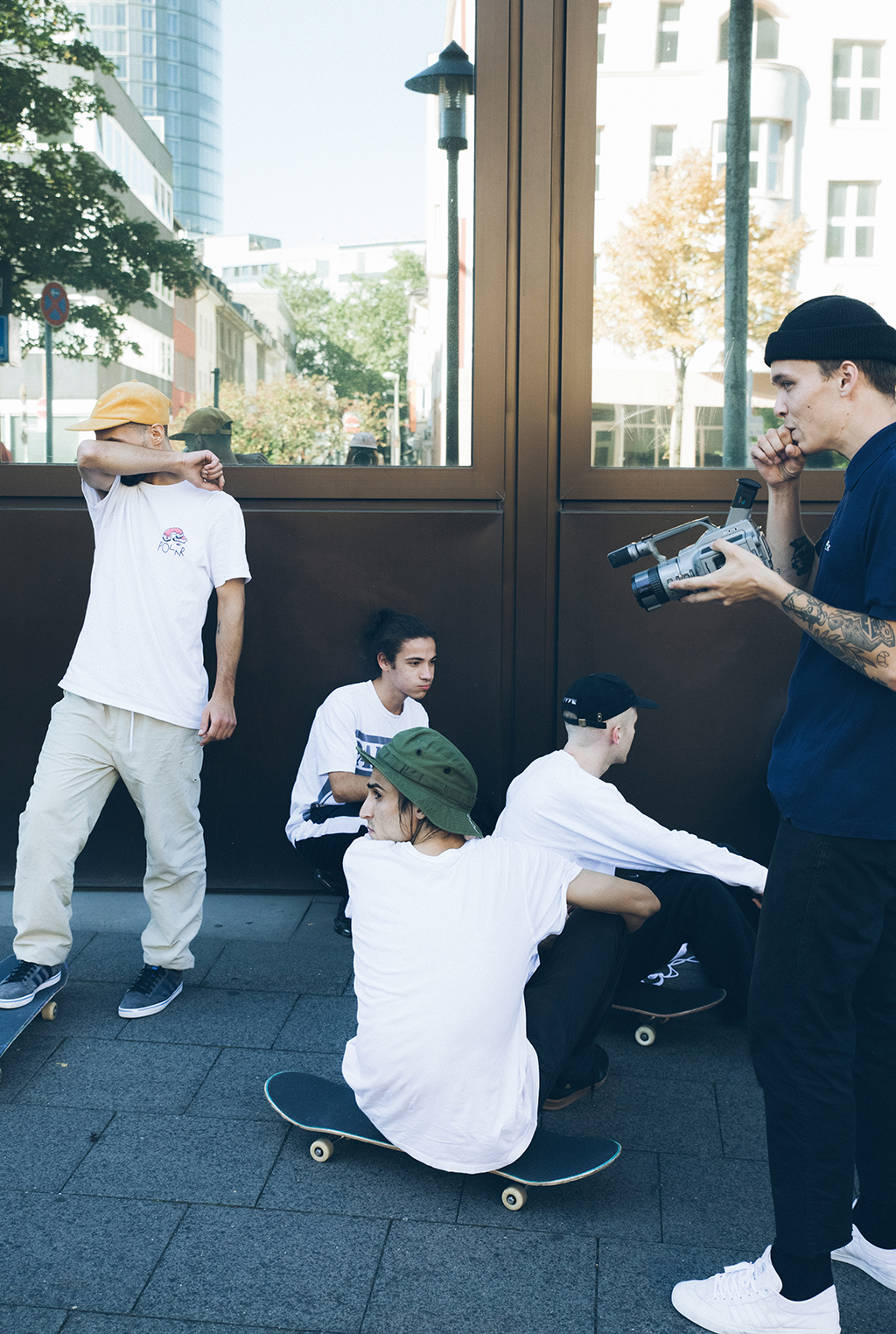 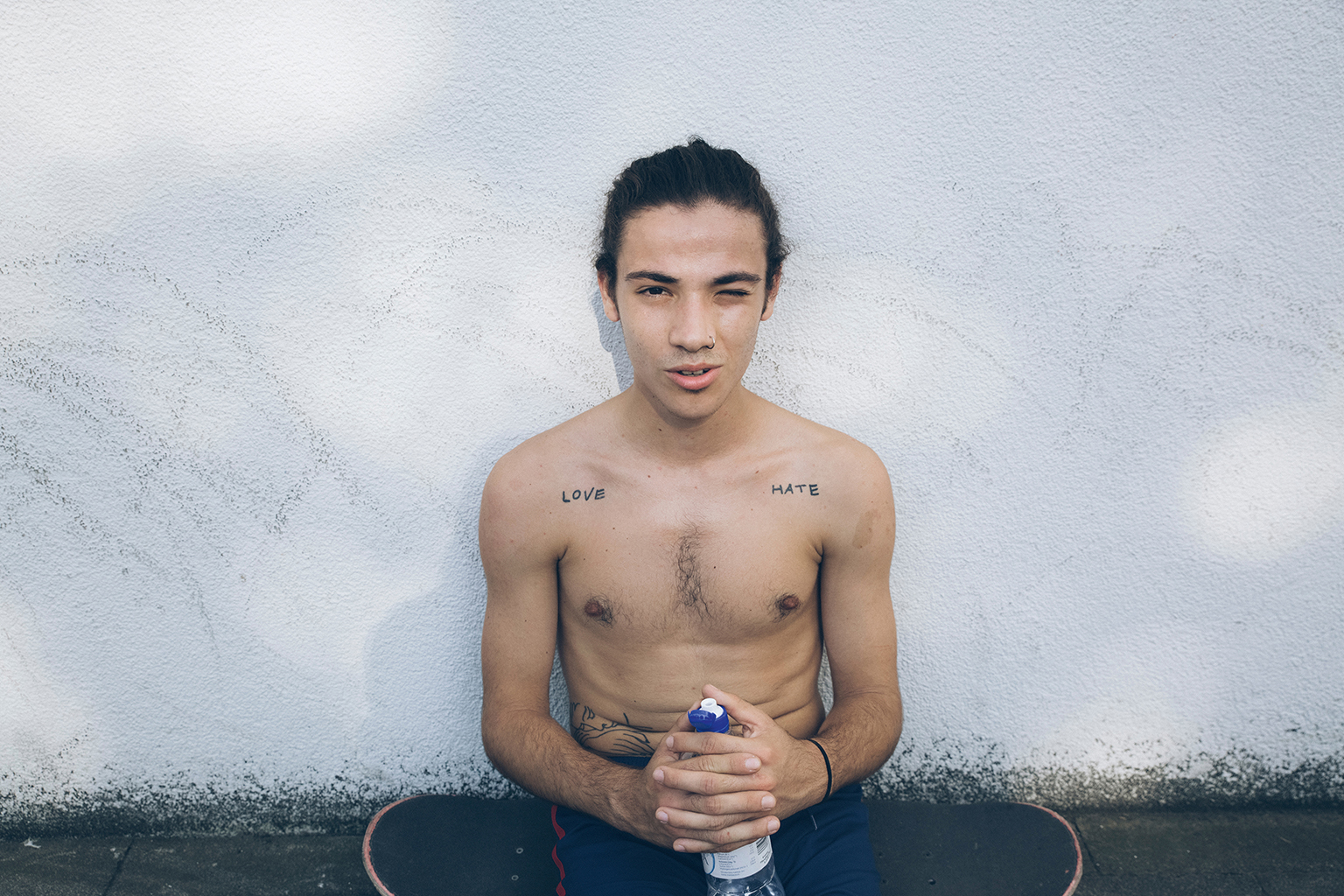 “Ruhrpott” is in the building! The Europe Co. just released their brandnew and highly anticipated full length called autobahn, which is absolutely one of the top videos this year. Niels Reimann’s creative mind did a great job and the soundtrack choices are on point as well. So be ready to get sparked!

The Clepto guys ventured out into the country to skate some spots that they would not normally skate, instead of only going to some big German cities they searched for spots in other (possibly greener) pastures. Escaping the fast pace of the city but risking the wrath of some small town people that did not want to see their peace and quiet taken away from them by some skateboarders. In the end, things seemed to have turned out for the best and they got some pretty nice moves on camera.