Finally, we know what the one and only Beagle is smoking. The “Shrimp Blunt” is his new smoking delight, and it seems to hit just right. Beagle and Shane Heyl brought together the whole(!) Shake Junt family and put out another masterpiece full of hijinx, good times, movie skits(!), and some amazing skating. The perfectly fitting soundtrack makes it even better. Eat that shrimp!

Get some Shake Junt HERE.

New York 1993 is a film by Louis Deschamps, a lot of people write “A Film By ….” and when is something a film? We are not sure but this video is not a video at times it truly is a film. This trip to New York Must have been magical for it to spawn so much output. Enjoy!

Here is to skateboarding’s very own Dennis Busenitz. A Documentary about the fastest guy in skateboaring. Watch what Jason Dill, Erik Ellington, Donny Barley, P-rod & a lot more have to say about Dennis:

We don’t know where this footy all came from but it is a great compilation of current day Boss footage. Isn’t it lovely to see how skateboarding is ageing without people losing that their flair.

Supra is killing it lately! A couple of days ago they released the second installment of the Supra dispatch tour / documentary series and now they hit us with nine minutes of NYC bangers. Their consistent video output, the diversity of both the team and the product have solidified Supra as a mainstay in the world of skateboard footwear.

Erik Ellington is a person with a lot of interests. This fact became even more apparent while I was doing some research for this interview. Professional skateboarding can consume someone’s life, as can running a business and raising a family. Meanwhile, Erik is not afraid to take risks and trade stability for possibilities. He is definitely a role model for a lot people, including myself. He was one of the skateboarders to watch when I was growing up and still is one worth following – time for a conversation:

Hey Erik, thanks for doing this interview…
Of course!

How are you? Can you tell us a bit about why you’re out in Europe? We hear you’ve got a few demos happening as well as filming for an upcoming project about the people and places that have shaped the London and Paris skate scenes?
I’m good, thanks! We’re out here promoting Lizard’s and my new [pro] shoes [on Supra], skating and just enjoying the scene. Yeah, the idea for the video project is pretty rad! It focuses on the people that influenced skating in their area more than just us doing a demo or whatever. It’s been fun to be a part of it. 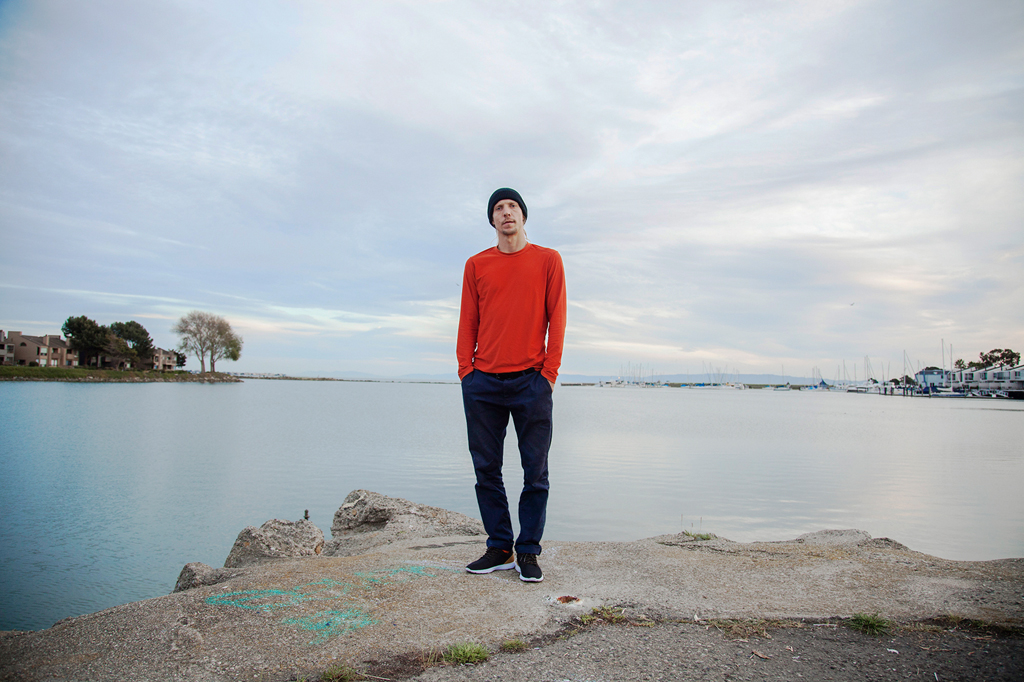 With you being born in Alaska, and then moving around to Arizona, and later California, do you feel like the place where you grow up has had a big influence on you as a skater?
Yes, definitely. I was recently back in Alaska and I was looking at some spots I grew up skating, and noticing how much that shaped the type of skateboarder and person I grew into. After Alaska I moved to Arizona and met all the friends I have to this day. My local spots and the crew that I hung out with had such an impact on me. Then moving to California I feel molded the way I handled myself as a professional skateboarder and taught me about business in general. I think your surroundings totally impact every aspect of life.

On past tours, Supra seemed to focus more on the 15-minute tour clip rather than a full length video. Do you feel there’s a difference between the tour clip and saving footage for a part or a full length video?
Both serve a purpose. I personally like the idea of working hard and putting together one project that means a lot. With the Internet, I feel it has given way to saving less [footage] and getting everything out there as it happens. On one hand, it’s cool because it immediately gets noticed and I really like the edits we create. But I definitely prefer placing a value on quality footage and saving it. 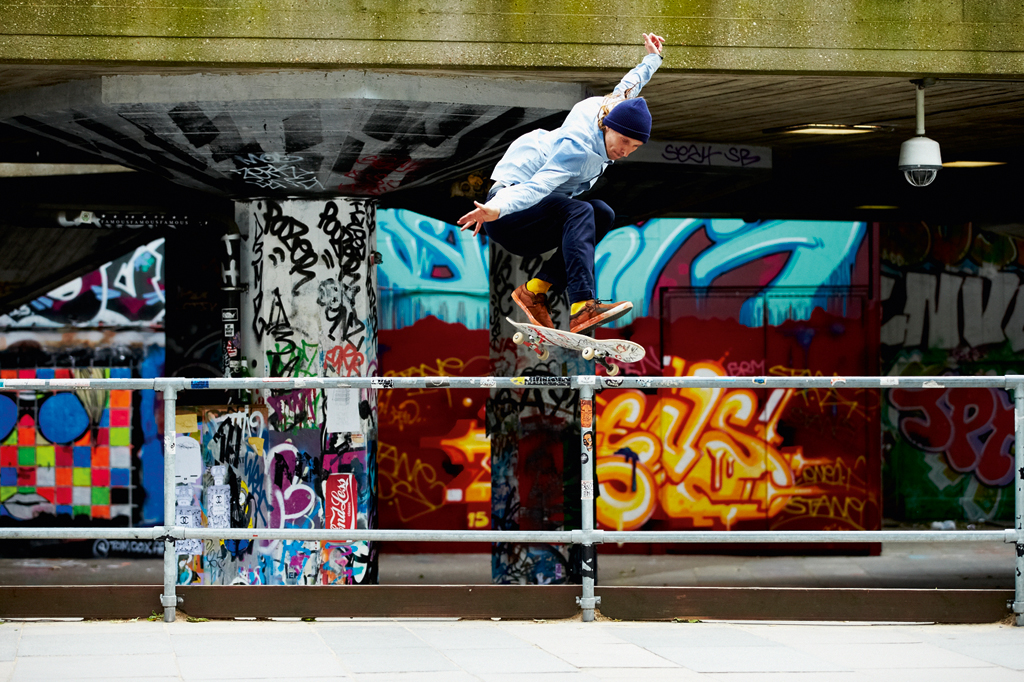 You have said in the past that getting drunk has often giving you creative ideas, how has this changed since you went sober?
What I didn’t realize at that time was that I can be just as creative sober. Most importantly, I now have the discipline to act on the ideas rather than to just talk about them.

When talking about creative ideas, we would have to mention your pro model shoes. Almost all of them had a distinct look that differs from a lot of what’s out there. What are the things you look for in a shoe, and how do you balance making something that looks different but is still commercial?
Thank you. I just try and design what I like and stay true to what I find feels and looks good. You never really know what’s gonna do well. I think the most important thing is not to chase what you think is going to sell or be commercial. 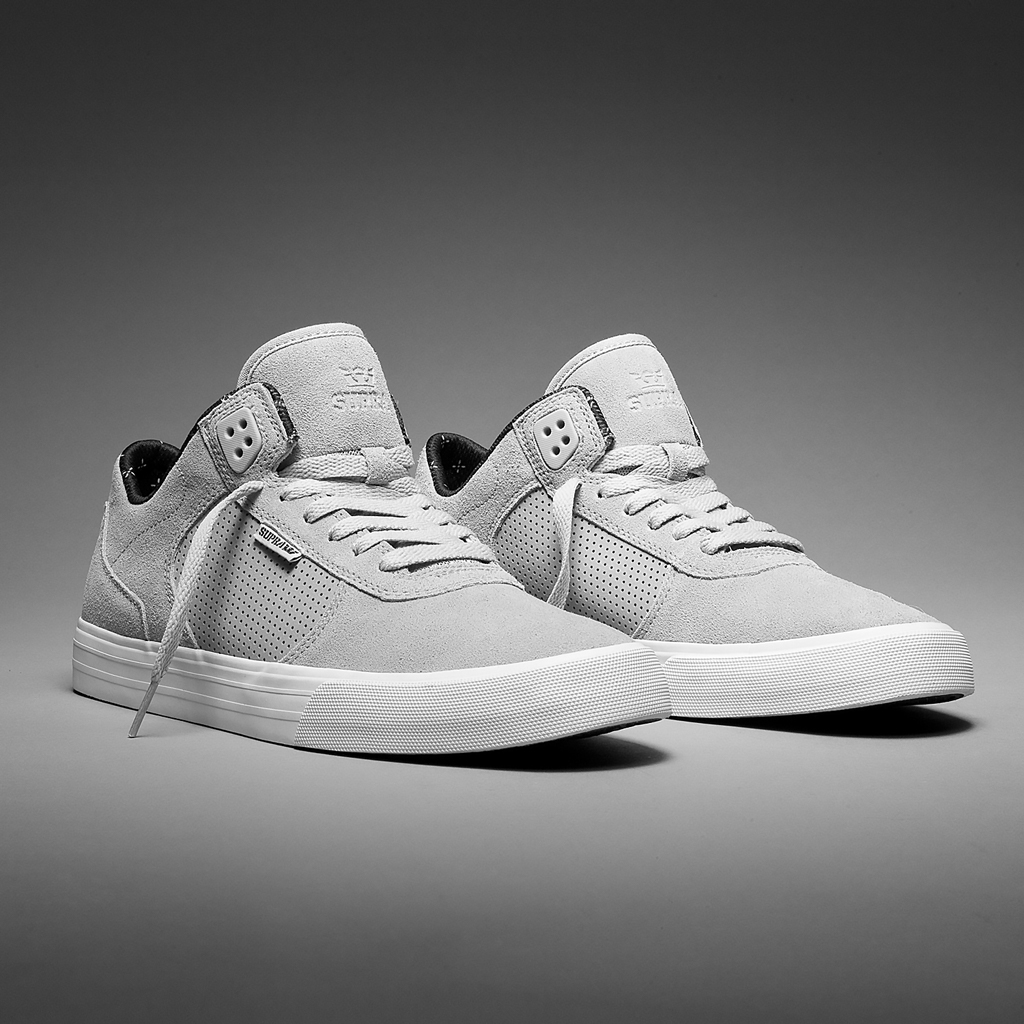 Can you tell us about your latest pro signature model, the Ellington Vulc? What’s new and what’s the inspiration behind it?
It’s inspiration comes from the Ellington cup sole and me skating in vulcanized shoes the last year or so. We basically slimmed down my original shoe and put a vulc sole on it. It gave it a totally different look and feel, and I was hyped right away when I saw the first sample.

Did your design approach change when you moved from Emerica to Supra?
Not too much, I’ve always been very hands-on with anything that I have put my name on. I worked a bit harder behind the scenes when we started Supra.

It seems like you’ve never been afraid to take risks when it comes to business and sponsorship, going from a steady home at Emerica to a new position at Supra as part owner, and then again with leaving Baker to start Deathwish and Bakerboys Distribution. Can you speak about what attracts you to start new businesses together with friends?
I like the idea of new things, it’s exciting and I think it creates a special kind of energy. There’s nothing better than being in business with people you respect and creating things that you like and that other people are attracted to. To me it’s very fulfilling.

On that note, I can imagine these new ventures have opened up opportunities both on the business side and the creative side of things, so how has your day to day changed?
For a while I felt that it was overwhelming and it was hard to balance. Since I have stopped drinking, it’s opened up so much more time for me. I feel like everything in my life helps balance the others out. My skating, business, kids, friends, and traveling all lend to one another.

What are some of the achievements you are most proud of?
To be a part of skateboarding still and be working with my friends, making a living and traveling the world. Twenty years ago that was just a dream. 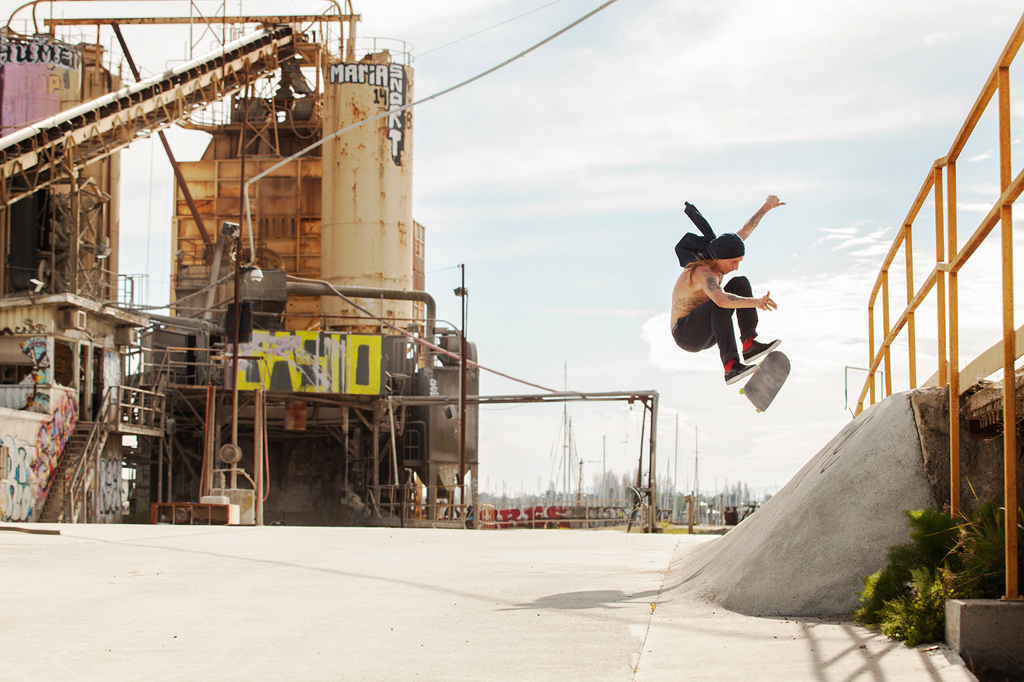 In the last couple of years, skating seemingly has become more international then before, with brands like Polar, Magenta, and Palace, pros are able to stay in Europe more and more instead of having to move to the States. Baker Boys has been doing US distribution for Palace for almost a year now, how did this collaboration happen?
Andrew and I have always been fans of the PWBC stuff. I got Lev’s email years ago and we started talking back and forth. Originally, I was going to ask him to help us edit the Deathwish video but we never got around to it. A few years later I was on tour with Lucien Clarke and we started talking about distribution. He mentioned it to Lev and Gareth and we figured it out shortly after that. I’m hyped to be a part of it, I feel like they fit with Bakerboys.

In your opinion, how has the rise of new and social media affected the skate industry, and do these changes influence you as a skater and business owner?
I think it has sped things up to an unhealthy level and I feel like it has to balance itself out at some point soon.

Moving away from the skateboarding side for a moment, how important is it for you to do things outside of skating?
For me it’s very important. Like I said earlier, there’s a balance. To have other creative outlets and interests motivates and inspires new ways of looking at things. 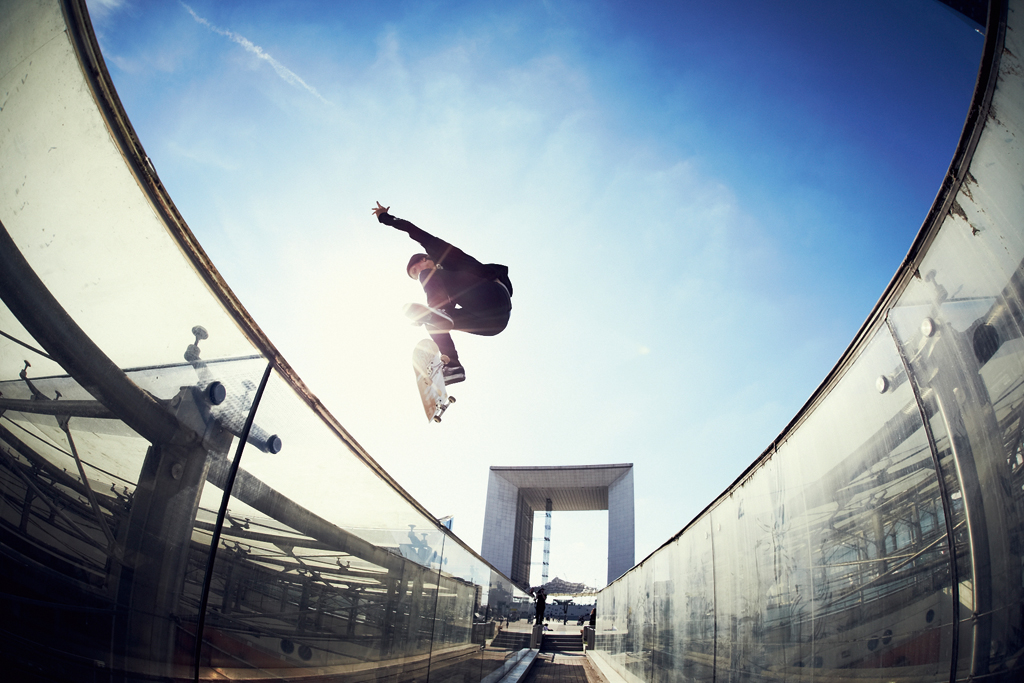 In another interview you spoke about your interest in architecture. You even said that you considered going back to school and becoming an architect. Is this still something that you think about?
I think about it from time to time because I’ve always been passionate about architecture. I don’t plan on being an architect at this point so it seems like a business class or public speaking may be more of what I need. My son wants to be an architect so I’ll just live vicariously through him.

At the same time, it seems that you have been posting pictures on Instagram where we see you building a tree house. Is this the realization of that dream?
Ha, yeah sort of. That’s mostly just my interest in building something with my hands. I enjoy making things to use around the house.

Thanks for the interview Erik, it’s been great catching up with you! 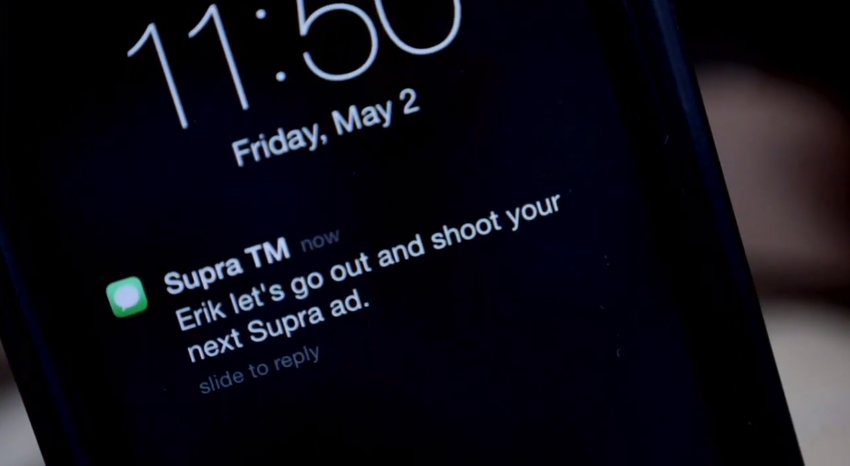