Today is Monday and you know what that means, no… we don’t mean the QS Monday links, it is time...
Read On

Tom Weimar is back with this new part that he filmed with Kert Hollywood. For those that know Tom’s work,...
Read On

In November 2018 I sent PLACE my last vid: “DORI’S DANCE”. Like one of my previous ones, “ANTR’S MIX”, I edited the complete montage to the music of one DJ or producer, whose music I value. I really liked the concept of editing the skating to the “weirdo” Stuff Frankfurt’s AVBVRN sent me, and also including my friend Dori, a professional actor and dancer. So I decided to work on part two, and this time I would start caring a lot about the mood and a little less about the highest level of skateboarding.

The edit culture of AVBVRN’s music is central to the vibe in “DORI’S DANCE 2”. In the Bootlegs/ Blends, I chose for the vid you can hear Mariah Carey, The Cure, and Burial… So the music seems preoccupied with temporal disjunction and nostalgia for a time in pop culture that I, born in 1993, didn’t even experience myself. The British blogger and cultural theorist Mark Fisher called the phenomenon “Hauntology”; I couldn’t even tell you what 2019 sounded like, because the music of the past won’t stop haunting us.

And then you have skateboarding with its obsession towards retro visuals, board shapes from the ’80s and the never-ending VX1000 look, that will always make you feel like you’re watching a skate video from the late ’90s…

The last track of the video is a Burial Blend. Burial’s music seems to be about the after-effects of Rave, about never actually experiencing it, as the music magazine Wire once put it. I think this fits the location the video was shot: “Club-Sterben” is a term to describe the crisis of night clubs in Frankfurt and in other German cities that are not Leipzig or Berlin. So when there is a lack of locations for parties with experimental club music, why not listen to it outside?

Thanks to Martin for the additional filming and for driving us to Strasbourg, Sriram for the titles, Dori for dancing, Ian (AVBVRN) for the music and all the skate homies for, well, skating. <3

At the end of last week, Tom Weimar contacted us by simply sending us a link to his newest video, something that happens from time to time and is always appreciated. We wrote back telling him that we would check it out tomorrow and he wrote back “😻”.

From the first time we worked with Tom – launching one of his previous projects “ANTR’S MIX” – we knew we were in for a ride. After watching about a minute I wrote him back asking for some more information, you can read his response below:

When you asked me why I made this video, at first I didn’t really know what to say. Putting out VX1000 style montages every once in a while has kind of become a routine. I do it primarily because I need to go skateboarding to relieve stress and when I go skate – at least during the summer months – I have my VX with me to film the sessions.

This year, around mid-summer, I had a couple of things filmed and a couple of my friends started to get ambitious, thinking about the footage they had and actively trying to get more. Because of them, I started to think about the editing process, selecting music and building a concept.

To be honest, I generally spend more time checking out music online than watching skate videos… Searching for Hip Hop, R&B, Funk, Soul, Experimental etc. is what I spend a lot of time on.

What links this video, “DORI’S DANCE”, to one of my previous ones, “ANTR’S MIX”, is that I wanted to edit the complete montage to the music of one DJ or producer, one whose music I value.

For this project I asked AVBVRN if he would be okay with sending me some of his tracks/bootlegs that could be matched to skate footage. And he did, he sent me some “weirdo” stuff. 🙂

To conclude, not only did I want to include all the skaters that I skate with but also my friend Dori. She is a multi-talent that can both act and dance. Making her part of the video felt natural to me. So, here is “DORI’S DANCE”, enjoy! 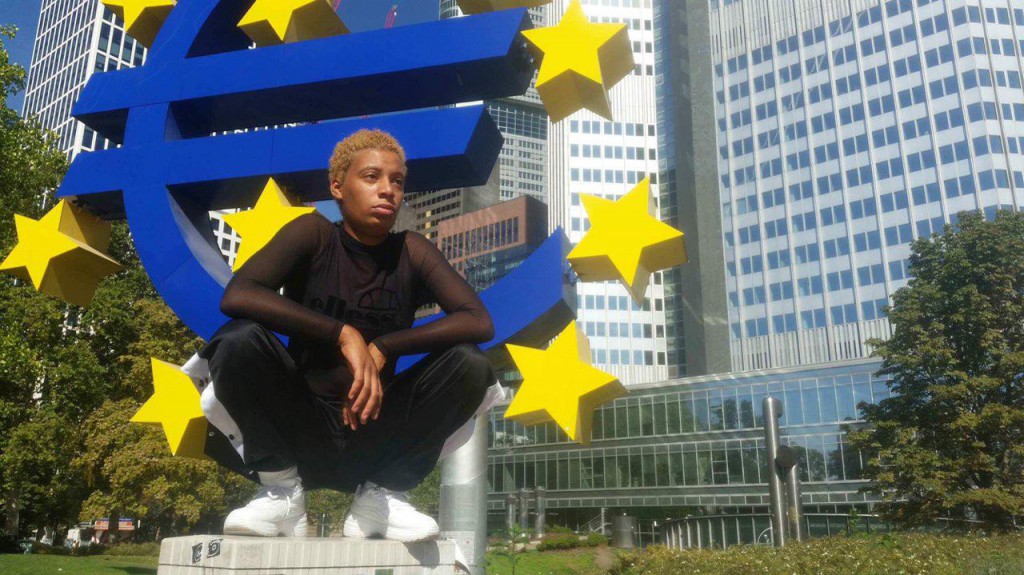 Last year, we interviewed Tom Weimar and premiered his video ANTR’S MIX wich stood out due to its use of original tunes, offbeat editing and a plethora of all different kinds of skating.

This all together created an interesting experience and so it was only logical that we came together again to premiere the follow-up video FFM MIX 2K18.

As the last video, this one promises Frankfurt’s locals skating THE legendary spot (Hauptsache Hauptwache), supported by their local shop, edited to some tunes and made by people from Franki am Main. Could it be more local? Maybe, if the skaters only ate locally produced food during the making of this video. Enough talk – Enjoy the video!

“ANTR’S MIX” is a video by Tom Weimar, which he’s been working on since summer ’16. Watch the video below and read about the process of making it in this interview with Tom.

Can you quickly introduce yourself?

I’m Tom, 23 years young and I’m filming skateboarding in the Rhein-Main area for about ten years. Right now I live in Darmstadt with a fellow student and my cousin, on the 9th floor of a pink apartment block, and study the master’s program “Medienentwicklung” in my first semester.

How did you come up with the name “ANTR’S MIX” for the video?

It’s because of the soundtrack. I asked my friend ANTR, who is part of Leipzig’s female DJ collective “Girlz Edit”, if I could use her “T a l e s” mix for the video. For me personally, it’s very important to support your creative friends. And music is a fundamental part of skate videos. If I don’t really like the soundtrack, the skating can be as good as possible, I won’t like the video in the end.

Who did you film for the project?

Only people who I enjoy skating with. But it’s not even about just having a good skate session, you know? I want to spend my time with these guys, have good conversations. This is why most of the people in the video are really good friends of mine. Frankfurt’s Bonkers Crew with Kert and Tim Thomas, as well as Arno, the legend from Wiesbaden (laughs). A real underdog who is always hyped about rough spots, sketchy tricks, and fast pushing. Then again, people I don’t know too well just joined the sesh and ended up getting some footy as well.

Okay, you already kinda gave the answer for my next question but: There are so many different skaters in the video. From skating handrails to just pushing on the street. So is it the most important thing for you to support the homies?

Yes, absolutely! It has always been important for me to have an egalitarian approach to my videos. Not just to film one because of status or sponsors. Everyone can join the session and film tricks!

How long have you been filming for “ANTR’S MIX”?

We filmed for one year, well, one summer actually. But I never filmed with the thoughts of doing a “big montage”. I was just taking my camera with me to see what happens in the end.

How much time you spent editing?

That’s funny. In December I went to Leon Rudolph’s “U Already Know” Premiere in Kassel and after that night I was sick for a whole week (laughs). But at the same time, I was motivated to create something, so I edited the video in two days. Instead of uploading it to my Youtube Channel directly I asked my friend Marius(Znüri) from Klubsoft to collaborate and add some artwork. 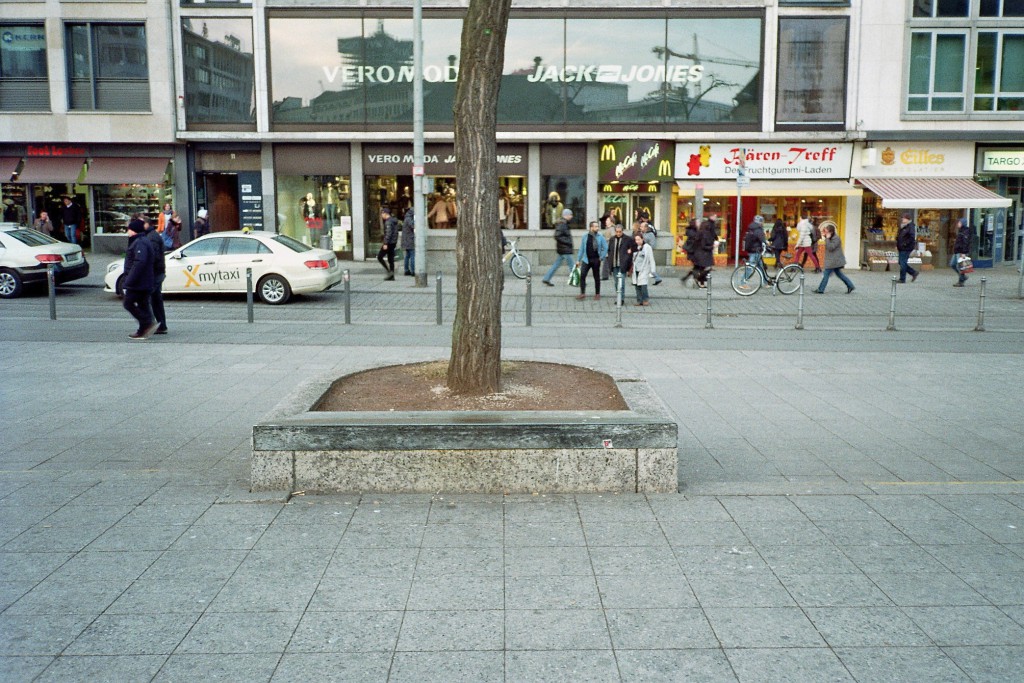 Well, haha, I really thought about this question a lot in 2016. My VX got fucked more and more, but a HVX is just too much for me. It’s too big, too heavy… So I really thought about just switching to my mobile phone and focusing on weird Instagram clips (laughs). Luckily my friends convinced me to get a new VX, so I got one for my birthday and, yeah, I will keep going!

Sure, I could try real hard to become an Internet celebrity. But I don’t think so (laughs). No seriously, I really found out that when you are out skating with the VX you explore so much more spots all around the city than you do when you just film with your phone. One time I read in a skateboarding magazine that Wiesbaden had no street spots, which is completely bullshit. You can truly skate every corner in the city. Look at Arno (laughs). And carrying the VX kinda pushes me to do that.

Did you travel somewhere to go film or was it Frankfurt only?

Wait let me think… No, I had so much other stuff to do working for my bachelor’s degree and giving skate workshops for refugees every weekend, that’s why I couldn’t do big journeys. I went to Erfurt for some days, but well… Most of the footy is filmed in the Frankfurt Rhein-Main area. Hauptsache Hauptwache!

Yeah, I would like to thank you (Paul Herrmann) and the whole Place Crew for this interview. It was a pleasure! In addition, a huge thank you to every skater who doesn’t stay in the skatepark, Martin from Bonkers for supporting all they guys and the scene here in Frankfurt. I think it’s this support that makes someone like Tim go hard like he did last year, skating Hauptwache full speed for hours while others already opened their second or third beer… I Can’t wait for next summer!

Photo’s and interview by Paul Herrmann.

Today we are premiering “Welcome to Franki” a skateboard video by a young filmer out of Frankfurt named Paul Herrmann. The video was shot in Frankfurt, Berlin, Barcelona and the French capital of Paris. It gives you a good insight into what young German skaters are doing (mostly in Frankfurt and Berlin) but it also has some mainstay people like Kai Hillebrand, Valentin Cafuk, and Timo Meiselbach. All in all we back Paul in his efforts and are proud not only to host the online premiere of his new video but also to welcome him into the PLACE squad. From now on Paul will produce a monthly video column for all of you to enjoy but first things first, take a seat, make yourself comfortable, press play and welcome yourself to Franki.